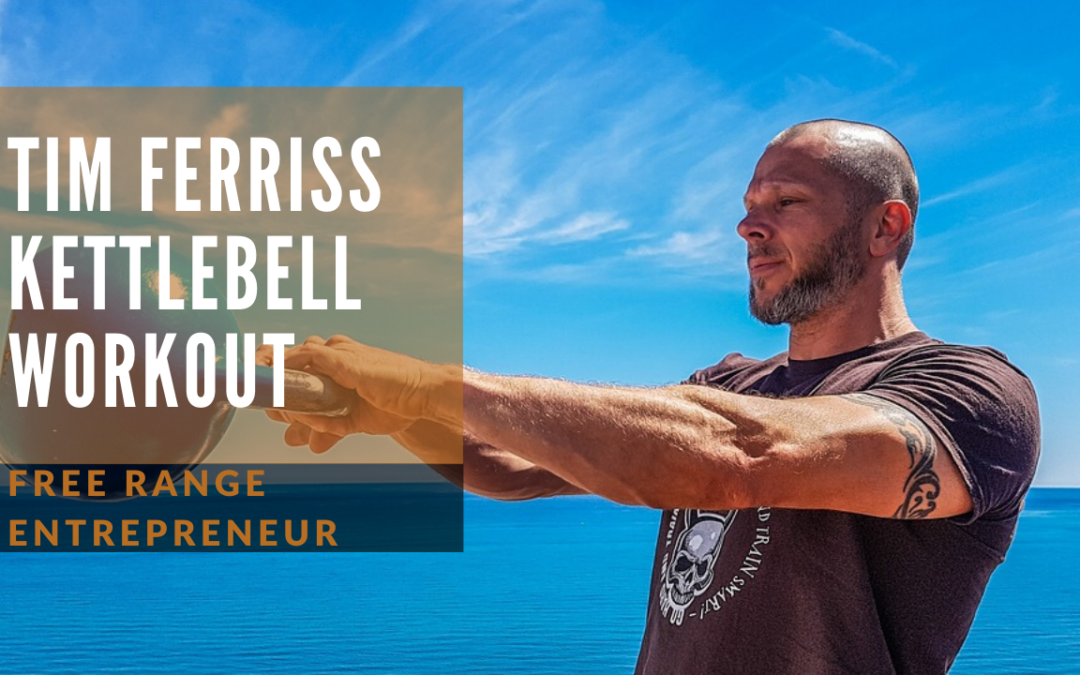 Who wouldn’t like doing kettlebell swings with that stunning blue sky background!

This post will give you some background to the Tim Ferriss Kettlebell Workout and explain how to perform the king of exercises, the two handed kettlebell swing.

In his book the 4-hour body Tim Ferriss discusses the benefits of the kettlebell swing and how Tracy Reifkind, a mother of two, lost more than 45 kg (100 pounds) just under half of which was in the first 12 weeks. The secret wasn’t masses of cardio or a severely calorie restricted diet, it was the Russian kettlebell swing done twice a week for an average of 15-20 minutes. She used this simple kettlebell workout combined with a slow-carb diet that almost anyone can do.

Tracy’s husband is a former powerlifting national team coach and olympic gymnast and introduced her to the two handed Russian kettlebell swing which forms the basis of the Tim Ferriss Kettlebell Workout.

“Every woman wants Michelle Obama’s arms. The truth is that you can have them, and a new body, in four weeks. The two-handed swing is the jewel. If you could only do one movement for the rest of your life, do the kettlebell swing.” Tracy R.

Besides weight loss, the Russian kettlebell swing builds muscle and will help you build a super-strong posterior chain from your neck muscles all the way to your achilles tendons. This creates strong hips and is a solid foundation for many power sports as well as helping you build an athletic posterior you could crack a nut on.

The Tim Ferriss kettlebell workout involves just two workouts a week for an average of 10-20 minutes. After a trip to Argentina he was invigorated to try the kettlebell workout and kicked off the day with a light high-protein breakfast and around an hour later used a 24 Kg (53 pound) kettlebell and swung 75 times. Do this twice a week and that’s it.

Initially he couldn’t complete 75 consecutive repetitions so did sets with 60 second intervals in between. You can start with whatever weight you can comfortably swing 20 times and complete sets up to 75 swings in total.

Tim claims that after only 6 weeks he was at the lowest body fat percentage he had been at in years and had achieved his goal of six-pack abs as well as gains in other areas. He built it up to 50+ reps with 48 Kg (106 pound) kettlebell!  In my opinion this can be achieved in combination with a healthy, nutritious diet.

Kettlebells are great for fat loss, maintaining lean muscle and for good metabolic health. When done 2-3 times per week they are one of the only forms of exercise you need for a full body workout and for great results that translate to better cardiovascular endurance and explosive strength which is excellent for so many sports particularly outdoor sports such as kitesurfing, snowboarding, climbing, biking and more.

If you need a kettlebell check out the range of kettlebells on Amazon.com or Amazon.co.uk.

Alternatively if you’re feeling thrifty and looking for a cheap alternative you can make your own DIY kettlebell for a fraction of the price. I particularly like the dry bag kettlebell suggestion, while it may not be a long-term alternative to a proper kettlebell, it’s an incredibly simple substitute while you’re travelling which is ideal for any Free Range Entrepreneur.

For more inspiration take a look at some of the other extreme sports fitness articles in tags and categories or click this link to read one of our other articles on 18 ways to earn money while traveling.