Mountain & Hill Walks Near Me: 10 of the UK’s Best Alternative Hikes 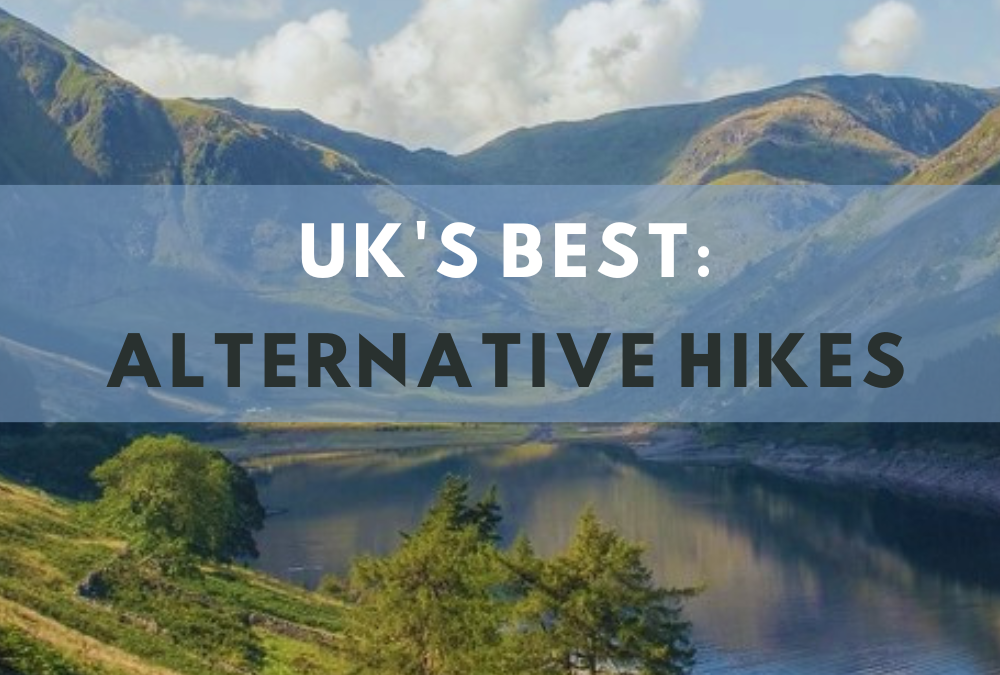 Are you looking for hill walks near you? Below are some of the best alternative hill walks and hikes in the UK.

Snowdon, Helvellyn, and Ben Nevis are all excellent climbs if you don’t mind long queues on the trails. The following walks are just as challenging and scenic, but without the crowds.

Hill Walks Near Me: The Lake District

Instead try this: Long Stile Ridge to High Street 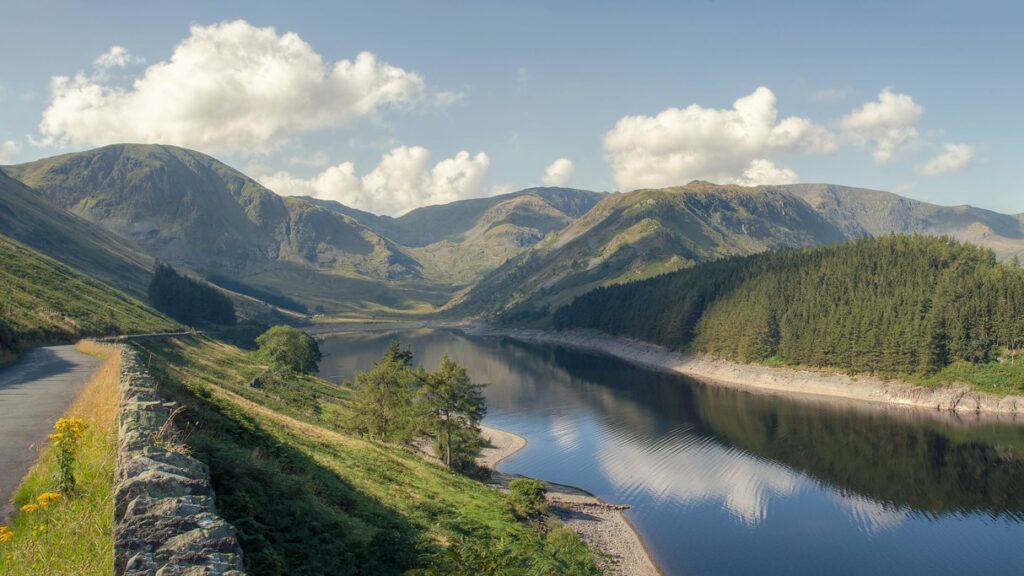 Helvellyn is a magnificent mountain, a massive throne of stone carved by glaciers, but it is also a victim of increased footfall.

Unfortunately erosion has wiped out some rare Arctic-alpine plants and is threatening the schelly fish, an ice age remnant found in the mountain’s Red Tarn.

Climbing High Street fell from Haweswater via Long Stile ridge is similar to climbing Helvellyn via the famously airy arête of Striding Edge.

You get a fantastic ridge and a stern glacial cirque, topping out on a broad plateau surrounded by Lakeland fells, but without the long procession of people.

Long Stile is a gentle scramble that is well within most hill walkers’ abilities, and the top of High Street (named after the Roman road that crosses its summit) offers one of the best views in the Lake District.

Instead try this: Scafell 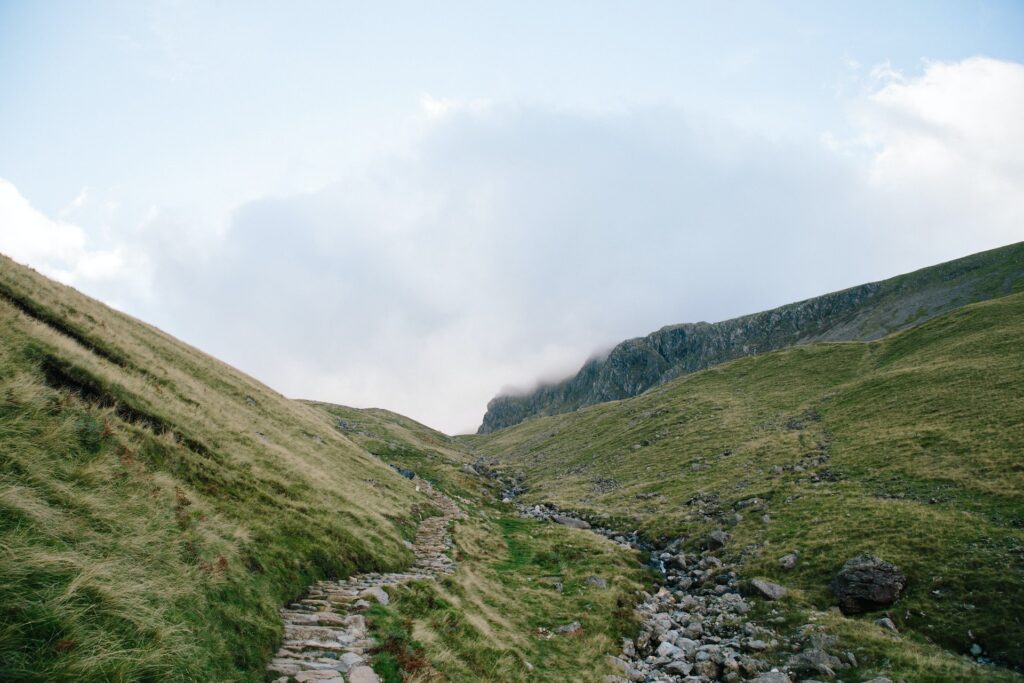 On a sunny holiday weekend, you’ll have to compete for the summit Scafell Pike with a crowd the size of a small festival.

Those who climb Scafell, England’s second-highest peak, less than a mile away and only slightly lower (14 metres), can enjoy the same incredible views, possibly from an empty summit and in silence broken only by the occasional croak of a raven.

The contrast is striking, thanks in part to Broad Stand, a treacherous crag that acts as a barrier, preventing people from hopping between the two peaks.

The most direct route up Scafell comes from Wasdale, but the best is the long, difficult ascent through the Esk gorge, which is studded with waterfalls tumbling into icy blue plunge pools, ideal for the aquatically inclined, and thermally resilient, on a hot summer’s day.

Upper Eskdale feels like England’s answer to a Himalayan sanctuary, a spectacular hanging valley accessible only to the most ardent Lake District pilgrim.

Hill Walks Near Me: The Highlands

Instead try this: Cairn Gorm and the northern corries 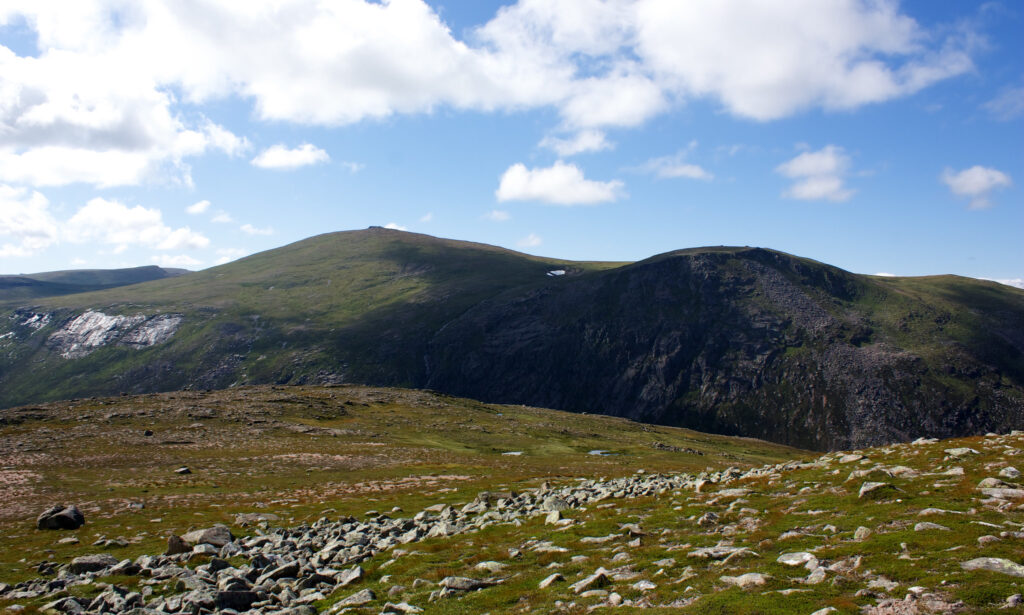 The Mountain Track from Glen Nevis is the most popular route up Ben Nevis. It’s ideal if you just want to tick the “Britain’s highest mountain” box.

Getting up there is an accomplishment in itself, but the route can be, at times, a bit demoralising – a series of switchbacks up the mountain’s most formless side. And it’s typically very busy.

For a similar sized adventure but with fewer people the circuit from the Cairngorm Mountain ski centre car park up to Cairn Lochan, over the awesome crags of the northern corries to Cairn Gorm (Britain’s sixth-highest mountain), and down via Sron an Aonaich is well worth checking out.

It passes through some of the most spectacular mountain architecture in the country and skirts the Cairngorm plateau, Britain’s highest terrain beyond Ben Nevis.

Proper equipment, a close look at a mountain weather forecast, and good navigational skills are required for any hill walk.

Skip: The Cobbler (AKA Beinn Artair or Ben Arthur)

Instead try this: The Tarmachan Ridge 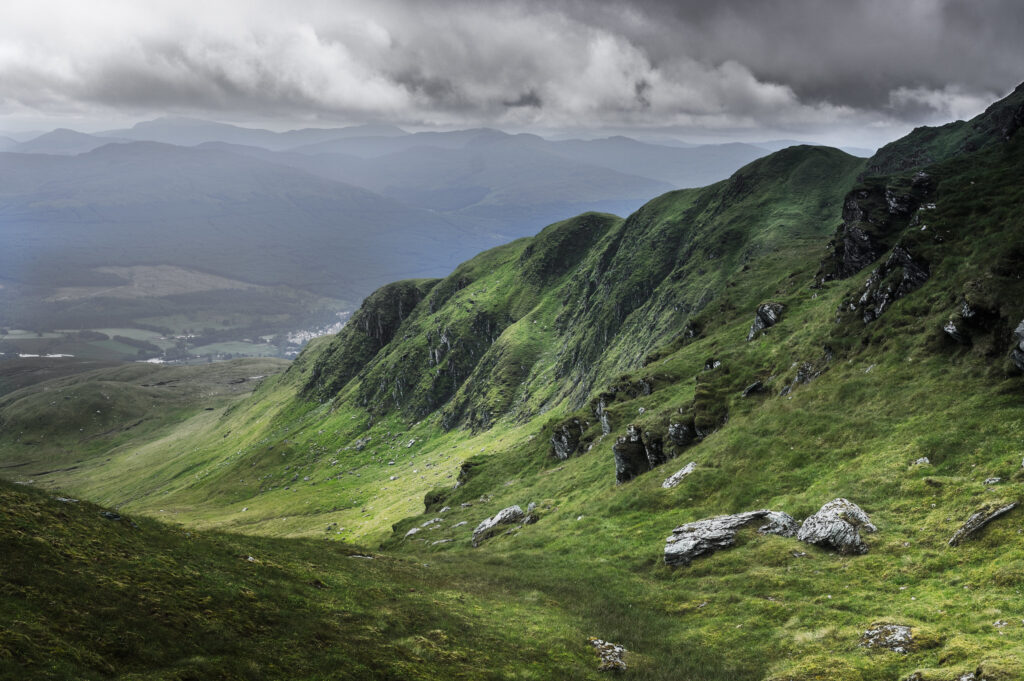 Most Scottish hills never see the crowds that some of their English and Welsh counterparts do, but the Cobbler in the southern Highlands is one of the few exceptions.

A magnificent mountain, its proximity to Glasgow and the Central Belt, combined with the allure of its Tolkien like, rock-fortress summit (hence the “nickname”), ensures that summer crowds are usually present.

Meall nan Tarmachan, a little further north, lacks such a high profile, but the full-length traverse of its rocky ridges and grassy arêtes surrounded by a sea of summits is one of the best mountain walking experiences in the Southern Highlands.

The mild, and easily avoided, scramble on the descent from Meall Garbh doesn’t quite match the thrill of “threading the needle” (the nerve hightening exposed scramble to the top of the Cobbler), but it adds a little fun to the hike.

Hill Walks Near Me: Brecon Beacons

Instead try this: Hay Bluff and Twmpa 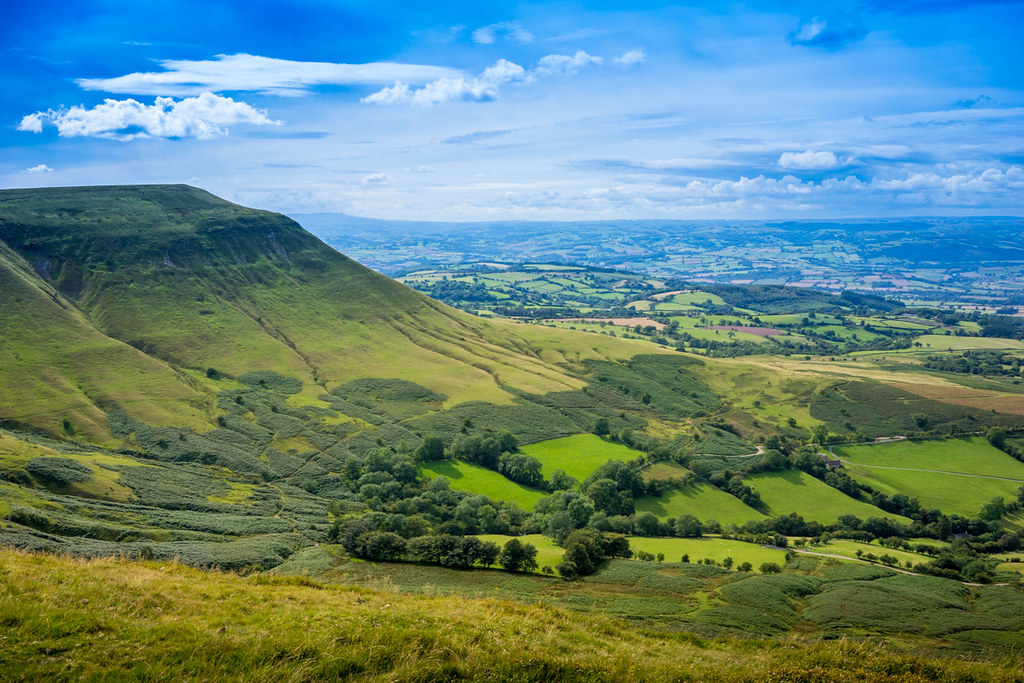 Pen y Fan has seen an increasingly common phenomenon, walkers forming an orderly line to get their all-important summit selfie.

If you don’t like the sound of this, head east to the underappreciated Black Mountains. Hay Bluff, located just south of Hay-on-Wye on the mountains’ main north-east-facing escarpment, and nearby Twmpa (also known as Lord Hereford’s Knob) provide a similar “top of the world” experience, but with a fraction of the crowds.

Semi-wild ponies graze on the ridges, kestrels and buzzards soar in the updraft. Visit on a clear day to take in the expansive views over Herefordshire’s rural countryside and into the hilly heart of Wales.

Hill Walks Near Me: Yorkshire Dales

Instead try this: Wharfedale Three Peaks 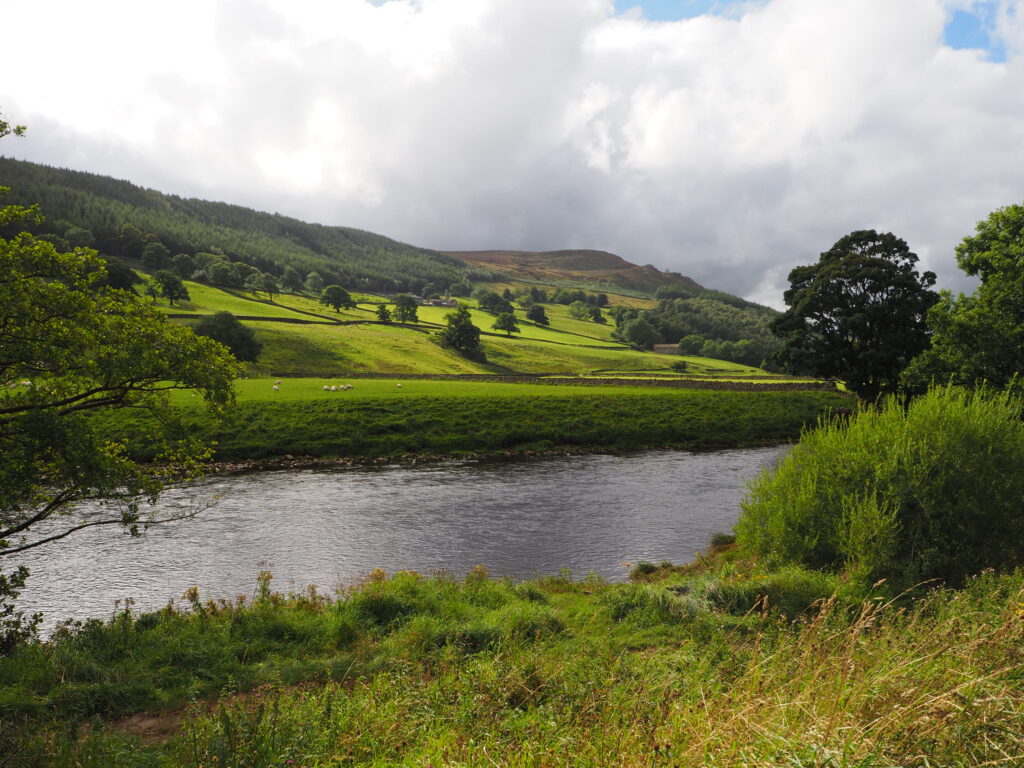 The magnificent 23-mile circuit of Pen-y-Ghent, Whernside, and Ingleborough in the middle of the Yorkshire Dales is more than just a long walk; it’s a cultural rite of passage.

However, overcrowding, erosion, and parking chaos have reached critical levels since the original “Three Peaks” walk was designed 130 years ago.

The Wharfedale Three Peaks, a high-level horseshoe around the top of glacier-gouged Upper Wharfedale, is a worthy alternative of comparable length and challenge.

Birks Fell, Buckden Pike, and Great Whernside (confusingly smaller than its name suggests) are more like wide arching ridges, but you stay up in the sky for longer.

On a sunny day, a pint outside the White Lion at Cray, around the 10-mile mark, is a welcome and worthwhile resting point. You will be exhausted, happy, and filled with wonder by the end.

Instead try this: Warrendale Knotts and Attermire Scar

Although not technically “mountainous,” the sublime karst architecture of the Yorkshire Dales can be as breathtaking as anything found at higher elevations.

The world-famous A-lister is Malham Cove, but neighbouring Gordale Scar gets its fair share of attention, as cars clog the fields and roads around Malham on busy weekends.

Nothing compares to the scale of Malham’s limestone spectacles, but there are some surprisingly overlooked gems dotted around the Dales.

Warrendale Knotts and Attermire Scar rise spectacularly from the folds of the landscape near Settle, their rippling rock layers reflecting the ebb and flow of the tropical sea in which they were born.

And nearby Victoria Cave, where the bones of hippos, rhinos, elephants, and hyenas were excavated in the nineteenth century, is another moving place to ponder lost worlds.

Hill Walks Near Me: Peak District

Instead try this: Chrome Hill and Parkhouse Hill 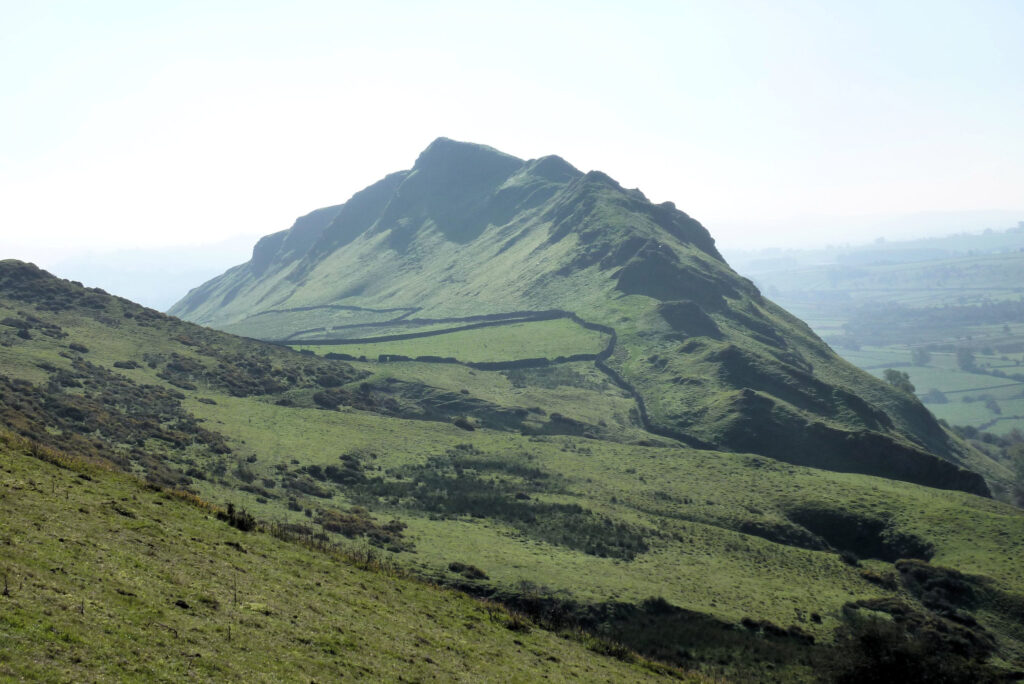 Chrome Hill and Parkhouse Hill are what would happen if you took a pair of Alpine mountains, shrunk them to about a twentieth of their original size, and dropped them in the White Peak’s green pastures.

They are the, rather marvellously, calcified remnants of massive coral reefs that existed in a teeming tropical sea around 330 million years ago, vividly illustrating the wonder of limestone formation, and their crags and slopes are a botanical delight.

As mini-mountains with wide-ranging views, they make a fitting and far quieter alternative to Mam Tor and the Great Ridge.

Offering a word of warning to those who are sensitive to heights, as they may find Parkhouse Hill somewhat overwhelming.

Hill Walks Near Me: Snowdon

Skip: Snowdon via the Llanberis, Pyg or Miner’s paths

Instead try this: The Watkin Path 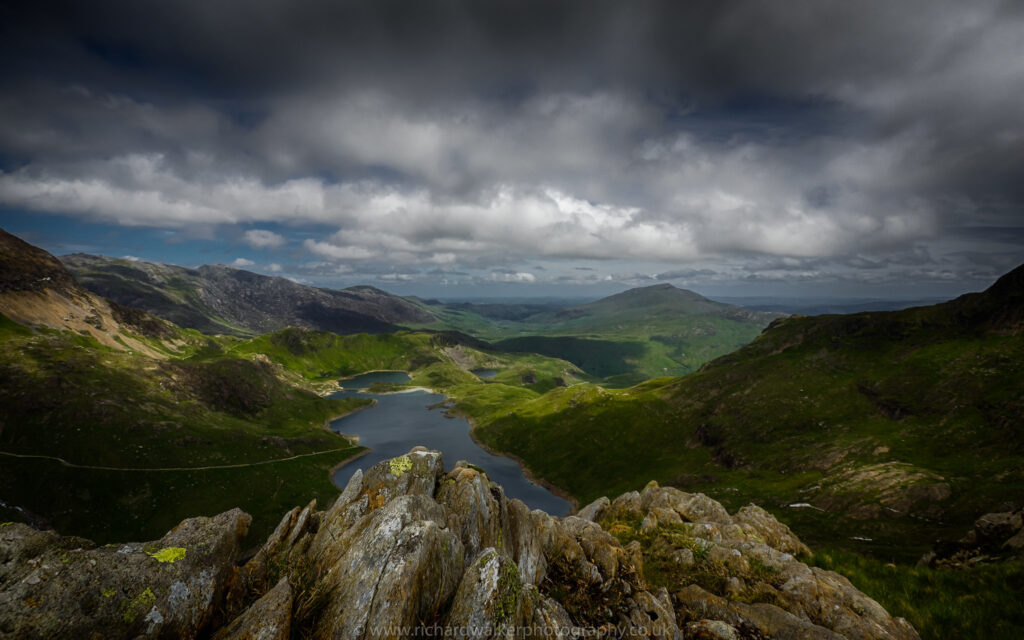 The previous descriptions of overcrowded hills are just a warm-up for Snowdon, which receives nearly 500,000 visitors per year, according recent figures.

Ascending via a popular path, such as the Miner’s or Pyg, can sometimes feel like you’re queuing for the summit from the first step.

However, the honeypot effect is concentrated in a smallish area here, as it is elsewhere: even on a sunny bank holiday, it is possible to climb Snowdon in relative peace.

Remember, however, that none of its paths will provide complete isolation, and the approach to the summit is always likely to be chaotic.

A few years ago, I would have been hesitant to recommend the Watkin Path, with its idyllic series of pools and waterfalls near the start, because it involved a steep and rather scrappy final climb to Snowdon’s summit, but thanks to the British Mountaineering Council’s fundraising efforts, a new path has now been laid on key sections.

Descend to the south via Bwlch Main and Allt Maenderyn for a spectacular and less-traveled circuit.

Skip: Tryfan and the Glyderau

Instead try this: The Carneddau 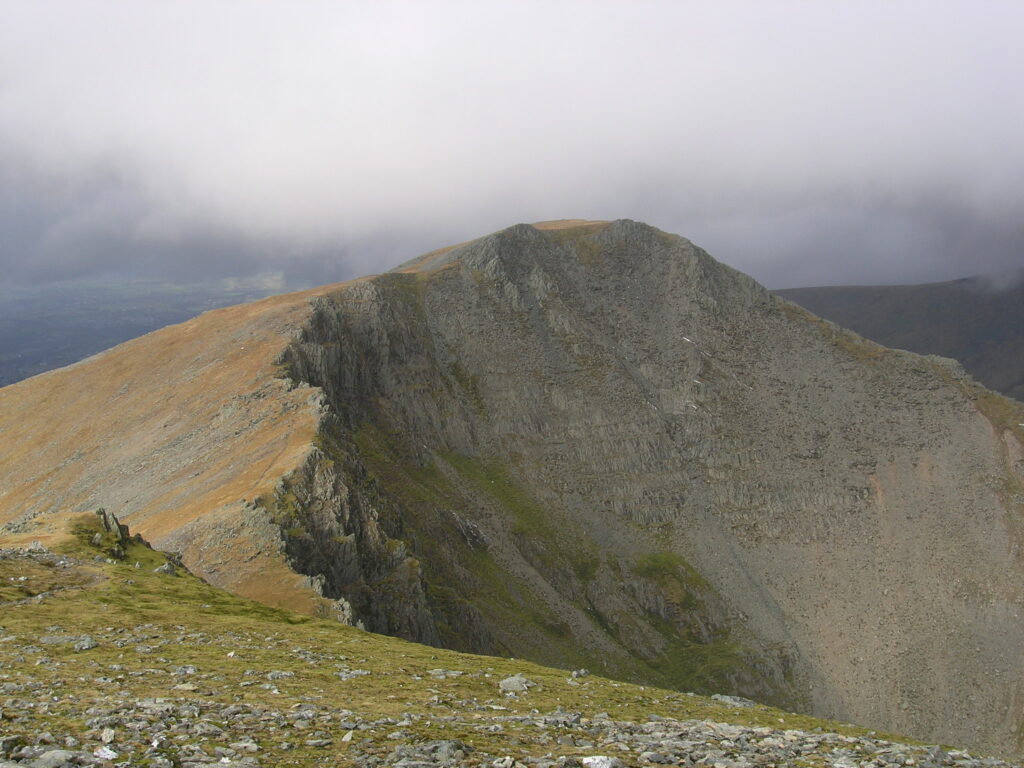 The wind-ravaged peaks of the Carneddau are a very different environment, consisting of a number of broad mountain ridges with whale-backs that could easily pass for Arctic tundra.

The Carneddau are frequently disregarded in favour of the more “glamorous” Glyderau, on the other side of the Ogwen valley, which draw enormous numbers of walkers with its heart-pounding scrambles and bristling ridges, despite being the UK’s largest continuous stretch of high ground south of Scotland.

However, in the vast Carneddau, you can linger high on those spacious peaks for hours after climbing up there, strolling about in a lofty spot where ravens, dotterels, and undoubtedly sheep frequently outnumber people and savouring the pure joy of space.

The circuit of Pen yr Ole Wen, Carnedd Dafydd, Carnedd Llewelyn, and Pen yr Helgi Du is a sure bet. The Llech Ddu Spur, a lesser-known classic scramble that is ideal for thrill-seekers trying to avoid the Glyderau’s crowds, is even hidden in the Carneddau.